So, week three. Currently I am 1/1. I have won a game, lost a game. So, slap bang middle of the road, pretty standard. So, I have flown Scum and Separatists. I have five factions left- First Order, Resistance, Republic, Empire and Rebels. Out of the five left I fly two of them, have plans for one of the factions and one completely does not interest me. So, the plan is to fly the faction I have plans for this week- Resistance. The thinking is, play them next and see if the list is viable that I want to play. 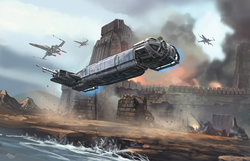 Now, originally Resistance was never in my eyeline a faction I never planned on playing. However, a sale at the start of lockdown, that put the conversion kit at the price of 1st edition TIE (A bargain. I could then use my Falcon and use my T-65 X-wings as T-75’s. This means that, while I have the kit, I have not played them at all. So, I am diving into the deep end.

So, to list building. My first idea went to, was to fly 5 named A-wings, with Heroic and just have some terrible fun. Another list that entered my head was running a standard Resistance falcon and some T-75’s. However, I have not used the falcon for either faction, so was sceptical to use it now.

However, another idea formed after I heard about the LA winner. Who flew a standard Ray, with the addition of Admiral Holdo and stealth device, a Fireball with stealth device and an A-wing with swarm tactics. The idea being that the falcon steals the stealth token, rolling 5 defence tokens, while using swarm tactics to hold onto it as long as she can before shooting. So, taking this idea to heart, I designed one based on a friend’s Vennie’s MG-100 superfortress. My build takes the Vennie and completely stacks a lot of things on him:  Holdo, Proton bombs, Paige Tico, veteran turret gunner, Stealth device, trajectory simulator, pattern analyser. I then have Holdo, who can steal tokens from other ships. The plan was to have a fireball with stealth device. Vennie then steals the cloak token and keeps it. If you like him up right, you could get six defence dice! 1 base dice, 1 eyeball from his ability, 2 from the cloak, 1 from range and 1 from an obstacle- Good in writing, but in practice never worked- Vennie would just get swarmed by lists. So, a new idea was needed- and it was found!

So, that was my plan sorted. Now, my opponent- B.Hourmat. Perfect, three rounds, three new people! We decided a time and pulled out our lists. His was Rebels (One of my favourite factions). He was flying 4 ships, which was interesting. Here it was-

So, a lot of Crack shot. I let slip that I love the rebel’s and started discussing what I fly with the Rebels. He let slip he did not fly or enjoy rebels so Imparted how I love flying four kind of aces (4-5 initiative, that sort of mid-range), that flying them in a box then flying apart. So, we started deployment. I deployed in my right corner; he deployed in an L-shape in the other corner. So, we would end up fighting in and around the rocks. Perfect! 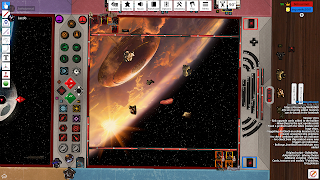 Round 1, Everyone moved 2 forward (I mean everyone!) With his 2 X-wings boosting. So, a standard boring round 1. 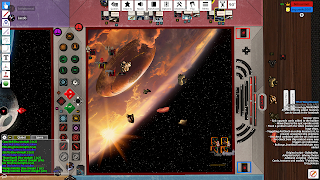 Round 2, now here is where something quite, well, annoying would show itself. AP-5 co-ordinated Thane into a Barrel roll. Ah, right something to watch out for. Greer banked 3, plus a boost 1 forward. Zizi did a 2 boost and a 1 boost forward. Ello also did the same, boosting forward as well. Thane went one forward, Jan went one forward too. I cannot remember (and did not write it down) what Wedge did, but he ended up facing my board edge next to Thane. Again, no shooting. Apologies, but hey… these things happen! 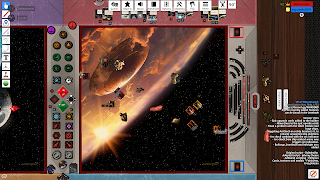 Round 3, the round where shooting finally happen! I have noticed that, especially now writing up my games, that if you are not shooting by round 3, you have done something wrong, or you do not want to fight yet (Always pick your engagements, never be forced). So, AP-5 did a 2 hard and again, co-ordinated Wedge into a boost. Greer 3 banked, Zizi 2 banked while Ello went 1 forward. Cova 2 banked. A lot of soft turning to engage. Jan 1 banked in, thane went one forward and wedge hard 3. So, shooting. Wedge had a range three shot through a rock, but because of his ability snuck one damage through, luckily shields were there. Ello had a shot on thane, but he evaded it all. Zizi managed to get one shield on Jan, while Greer rolled hit crit and got nothing through. Thane shot at Zizi but got nothing through. 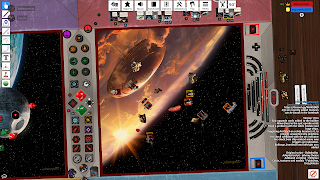 Round 4, AP-5 took a 1 bank and gave Thane a focus, that blasted robot was driving me insane! Greer went two forward, Cova took a 2 bank. Ello went three forward and Zizi took a 2 forward. Thane took a 1 bank, plus a barrel roll right. Jan went 2 forward, took a focus, turning it into an evade through Jyn. While wedge bumped (yay!). Wedge gets three hits through, with Zizi evading 2, with one shield damage. Zizi get is three damage through on Jan, taking shields and 1 hull. So, Thane got three hits through, Cova blanked… and as is tradition at where I play, I shouted in excitement, “HEROIC!” Ok, I may or may not be falling in love with this list. Cova then rolls two evades and she takes one shield (PHEW). Jan shoots Zizi but gets nothing through. Cova shoots Thane while Greer shoots Jan and AP-5 shoots Zizi. Nothing goes through for all of those shots… frustrating for both parties! 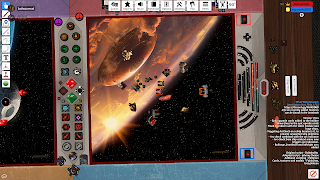 Round 5 now, AP-5 takes a 3 bank and gives wedge a target lock. Greer takes a 2 bank, squeezing in-between Jan and AP-5. Cova pulled transport time and takes a 1 back, taking a focus with pattern analyser. Ello takes a 3 left talon roll and boost is 1 bank right giving him a shot on Jan nicely. Jan banked, before my ships moved. Thane banked three, wedge banked 1. The picture I am showing you is the aftermath of the fight. Now, I am splitting up this round, as shooting was weird… as you will find out. Wedge got 5 shots off and using his Target lock got 5 damage through… killing Zizi (no surprises there). Ello shoots Jan, leaving her on 1 hull. Jan shot Greer, stripping shield. Now, Thane’s turn… He shot Cova. The problem is, the game told us it was Range 2, but not one part of the arc of range 2 was touching. We both agreed that it was range three for both ships. After taking 5 minutes of deliberations, Thane blanks out… Typical! Cova shoots back but nothing got through. AP-5 shoots Zizi out the back and leaves her on 1 hull. 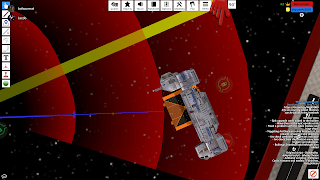 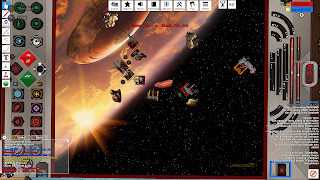 Round 6, AP-5 takes a hard 2, Greer takes 1 hard and bumps. Cova takes 2 bank, blue which is now blue due to R4. Ello takes a 2 hard, Jan takes a 3 straight. Thane does a 4k and Wedge bumps. Shooting, Ello kills Jan, who before she dies kills Greer. That was an awful trade… I am now losing on points, I reckon. Thane shoots Cova and gets nothing through. Cova shoots AP-5, killing his shield and getting him down to 1 hull, so annoying! I needed a miracle last turn… Here is hoping! 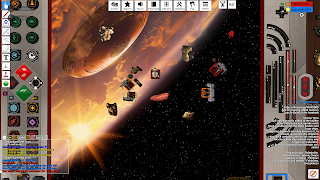 Round 7, last round! AP-5 banks, getting out of the way. Ello takes a 2 left hard. Cova takes a 1 back, too avoid Thane, who I hoped would either go forward or soft bank. Thane goes two forward and Wedge bumps… Now, we stopped and worked out points roughly… I needed to half-point Thane to win. I manage to get three hits, including a crit… It all looked good, until he got two focuses and stopped any chance. AP shot Ello and got nothing in return. So, we properly worked out points and it ended 88-79 to my opponent… annoying but deserved. 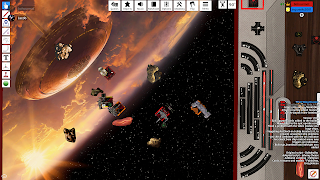 I would not say I was out flown. The dice just seemed hot at all the wrong times. I am an avid Rebel flyer, but I have kept clear of Wedge… I might need to change that! He is nasty. Now, add Outmaneuver? He could be nasty, but his points cost has always put me off him. Now, Jan is interesting. The ability of Mouldy Crow is amazing, banking focuses and giving it a far better weapon- the three-forward arc. AP-5 being able to co-ordinate was amazing for him, allowed him to boost and barrel-roll before he moved. The target lock was a good choice as he bumped with wedge and knew he had a lot of dice about to be thrown at me!

Now, this list I flew… well I really enjoyed it. Ello is fun, that Talon-roll was brilliant allowing me to get back in, plus the boost for free. I always preferred the boost on the S-foils, but this game I needed the boost more than the Barrel roll. Also, Cova is really good fun, the ability to go back and then roll one more die when I am stressed is brilliant! Stick on Korr Sella and R4. I am unsure however, if Korr Sella is needed as I will only have one stress on me at one time. Something to tweak possibly, play around with. For one point, crack shot is fun to have. Optics could be a lifesaver, but I always rolled eyeball and a blank, so only got 1 hit through at any time.

So, now I am 1-2 in the tournament and it has already helped me. I now know, after lockdown I am going to go and purchase a Resistance Transport and 2 A-wings. Plus, my shop will need it after all this time shut. So, the Draw is tomorrow and I am excited… I am still unsure what I will fly, with the Republic, First Order, Rebels and Empire to fly still. Who knows. But, you guys will know soon! 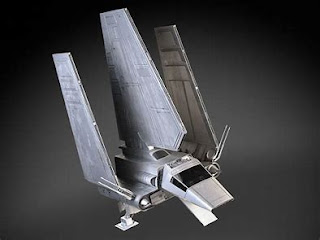 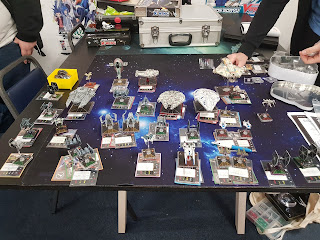